I recall a time when I was a kid, during the height of the ‘Teenage Ninja Mutant Turtles’ craze (of which I’m still part of), that I wanted to study genetics so when I grew up, I could create my own group of mutant turtles. I was a lonely kid back then so I wanted friends. Never came through because I suck at organic chemistry (much to the chagrin of my parents, both chemists). So I became the second best option, a writer (well, technically the third option, as you might know, I’m an industrial designer transformed into lecturer/researcher by trade and writer by passion, but I digress).

Now that my science fiction story about bioethics in space “What Measure is a Homunculus?” is being published and available on Amazon on the 19th of October, in the Quantum Soul anthology, I can discuss about the topic of the story. No, I won’t tell what’s about beyond the rights of artificial humanoids used as weapons/foot soldiers, you need to buy the anthology.

But I can talk about what inspired me to do so. First, there was this article that talked about how scientists were trying to create a living being from stem cells without a father and mother (in terms of DNA donors whose reproductive cells create an embryo, not actual parents). From there to the creation of synthetic living beings we could a few generations removed, but it is still a possibility. And that made me think about the lack of legislation to protect the rights of such beings (even if it is just an amoeba).

There are few times when I can mix my day job, my Ph.D. and my real job as a writer in the same thing, which is the case of this particular short story.

Most of my sustainable design students know that I loathe Monsanto, as the epitomize most of what’s wrong with our current economic system. And that loathing is supported by the fact that companies like that think is right to patent the DNA of a living being. But it is not. It might be legal, but that doesn’t make it right, even if is the DNA of a mouse or a fly. DNA is what makes a living being it. It shouldn’t be beholden a property of a faceless company. For me, personally is tantamount to creating the precedent for a new form of slavery. Look, I’m not against researchers patenting stuff (I work as one after all), but while I see the case for patenting the technology to create such advances, I still think that is wrong to patent the DNA of a living being just for coins.

This makes me think that there is a need right now in literature and other media, one asking for more stories that put in the collective consciousness, on the debate table the discussion about bioethics. We need to sit down and discuss what we are doing, if we should be doing it, who should be doing it and for what reasons, instead of just using economic excuses. I think it is the time we redefine what we consider life and its intrinsical rights.

This whole rant, if you want to call it that, makes me recall what Michael Crichton wrote in the first pages of Jurassic Park, how the technological development moved from governmental labs into private sector labs and moving at such pace that there is virtually no oversight about what we are doing with this technological might. We don’t stop to consider that the question is not ‘can we do it?’ but ‘should we be doing it?’.

It’s not a discussion on technological progress. I think that progress is needed if we aim for a better world. But progress for the sake of it or the sake of the purses of people that don’t give a damn about the state of the world is madness. Science Fiction has always been a window to our potential futures, good or bad. Just like there is a recent wave of climate fiction, there is a need for a resurgence in bioethics fiction. Let’s as writers raise awareness of the topic because it relies upon society to do the changes needed. Let’s bring bioethics to the debate table before it is too late.

Upsss. I think I went into lecture mode. Sorry for that. My point was to explain from where it came to the inspiration for this story, so when you read it you know where I’m coming from. In any case, I invite you to acquire this new anthology by the fine folks of the SciFi Roundtable: Eric Michael Craig and Ducky Smith. I had the opportunity of reading several of these stories and I can assure you they are a good option for the science fiction fans looking for new voices in the genre. So go, give it a chance and read it. 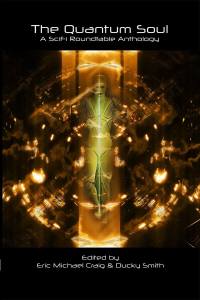