As I mentioned before here, I will be sharing my notes on the world building of the Tempest Blades setting. I will start by the organization that molded one of my three Main Characters, Gaby Galfano: singer, heir and kickass one woman army. 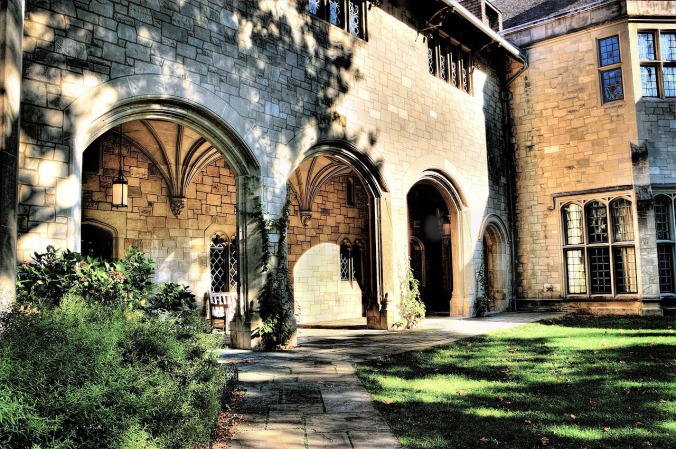 While a common name in the modern popular culture around Theia, the Sisters of Mercy are a mystery to many outside the order. An ancient order of nuns founded after the Reformation, their original objective was lost during the following conflicts that marred Theia. Nowadays, it’s officially recognized as a private educative organization, with the main abbey located on an island in the Inner Sea, south of Ionis. It provides to chosen girls (not more than thirty to sixty per generation if rumors are true) the education and knowledge required to be an upstanding citizen and a proper lady of the upper class. And in truth, the education offered there is top notch and many of their graduates often enter prestigious universities and high ranking jobs, while marrying into powerful families.

The sisterhood takes girls from the entire world and of any social background to train them as healers, singers and most important but less well know, spies and assassins of high level. They recruit them young, at least since they are 6 years old and the training ends around 18 years old. Some of the girls are orphans, street urchins recruited thanks to their smarts and sneak abilities; others are daughters (often unwanted) of rich and powerful families, usually merchants or politicians who send their offspring there so when they come out of there can help to the business of their parents.

The school is divided into three major houses: Light, Dark (also known as Shadow) and Caring. Most girls are placed in Caring, where on par with their elite education are taught performance arts, healing and other offered tools to survive in a tough world, as the sisterhood honors the name. Of those few selected for the Light and Dark houses, a lot is expected and thus special training is provided. No one really knows what entails the special training, but rumors of mind enhancing drug treatments, mystic rites and weapon and hand to hand training are often heard. Graduates from the Light house tend to work as public figures  and diplomats at least in the open, while Dark house graduates are usually ushered to be spies and assassins under the guise of hostesses, executives and wives of powerful men and women or for their families of origin (in the case of those that come from rich families).

The students from The Light & Dark houses have to undergo a Last Rite in order to graduate, a rite that binds them to the order. If they fail or refuse it, they are thrown into a labyrinth carved inside the mountain, beneath the main abbey. If they solve it, then they are free from the order. But the place is so dangerous, dark and devoid of anything than the few unfortunate students cast there end dead by starvation, dehydration, broken bones or the three of them. In some cases, not even their bodies are recovered as the students gossip about a creature lurking inside the Labyrinth.

These graduates, the ones that gave fame to the school are known for their hand to hand combat prowess, tactical knowledge and for an ability known as ‘Ice State’. This ability, witnessed a few times allow the user to enter into a trance that allows a certain degree of precognition and telepathy, enabling the sisters to be fearsome opponents in combat against many foes. However, it is said that entering the Ice State constantly or for long periods of time leaves the user with severe emotional damage, unable to feel anything afterward.

Usually, no girl leaves the school before her 18th birthday, though there are exceptions, depending on how advanced is the trainee or because of special decisions made by the Superior Mother before the Crone Gathering, the supreme ruling body of the sisterhood. Of those that choose to remain with the order (or those that after many years decide to return), they are offered food, work, and refuge.  Those that decide to leave the order after the 18th birthday… well, that’s another matter, as is not unheard that two sisters can found themselves often in opposing sides and while sisters in the sense of shared teachers, they don’t own any honor or respect to each other, competing even to deadly ends. There are cases even of renegades that take darker paths and can be found in the even more mysterious Allara Circle. In truth, across history, both heroines and villainess can be found that are members of the sisterhood.

Although not unheard of, it is extremely rare for a man to be accepted in the school, usually orphan babies that are raised to be bodyguards of the sisters and the graduates. They are known as the Brothers of Silence and while their services are highly regarded and expensive, they are rarely seen and even more rarely heard as they either take their vows of silence too seriously or as legend has it, their tongues are cut off. The sisterhood is not a man-hating organization, on the contrary. However, their main task is to provide protection to the women.

And in truth the order, despite its apparently sinister motives, are actually keen to help others, especially the infirm, the dispossessed, abused women and orphan children. Despite these shady elements, the Sisters of Mercy have a well-earned reputation as stand up citizens of the Free Alliance, usually keeping themselves as organization neutral regarding the many squabbles between Alliance members, and sometimes even participating on the Alliance side in major conflicts.In both peace and war times, their medical training has been considered invaluable.

The Sisters of Mercy are the most well-known mysterious organization of Theia. But they are a power to be recognized. Where it stands with the changes that the world will face, no one knows. What is known is that it will play a role on the dueling fates of the realm.